On a small, lively corner right down the street from The White Sox’s South Chicago stadium is home to “The Temple”: a sprawling, living music studio with equal parts D.C. superheroes and anime-inspired decorations. Here, a Charmander plushie playfully glazes off to the side at Batman, working beats and ideas bumping from the monitor below. 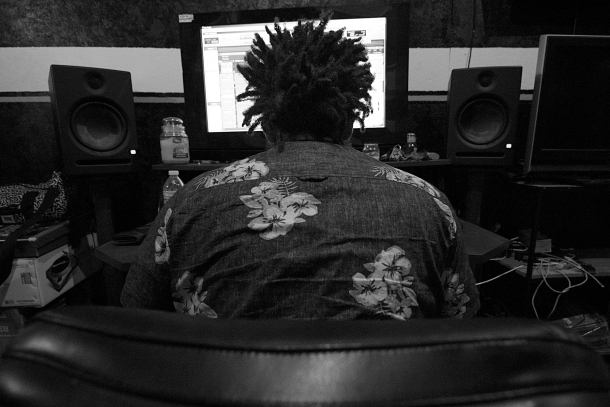 The resident monk residing in this temple is Vee Miyagi, the Chicago born and raised rapper trying to make it without compromising. He’s a friendly, endearing guy who’s beard gives him the wise appearance of his namesake, Mr. Miyagi of wax on/off fame. Dressed in a grey hoodie, coffee almond khakis, and with short wild hair he lets us know that his wisdom isn’t just an appearance. “Chief Keef was just an anomaly…” he recalls for us as he scrolls, clicks, and unclicks through his dozens of working demos on his screen. He’s referring to the now-legend that came on to the scene, brought drill to the forefront, and unknowingly offered himself as the scape-goat martyr for lazy politicians and mayors to take aim at the city’s violence through him. Banned from the city, he escaped to L.A. leaving a generation of drill babies in his path.

But Vee Miyagi understands that won’t happen again, at least not through drill music. Vee Miyagi instead opts for the silver-tounged, cold rhymes of another once-heir Chicagoan Lupe Fiasco. Like Lupe, Miyagi is a huge anime fan and it’s draped over his studio and demeanor. “I don’t mean to get all in your business, but are you in a relationship?” he suddenly asks me during our anime talk, “Have you fell in love before?”. I do some quick mind-flips and stutter out an answer, but he’s already discussing his favorite Studio Ghibli films and how they make him feel like he’s in love.

“Oh so you’re just tryin’ to get the ass?”. I laugh, but I feel like he has some actual life and relationship advice that’s worth gold.

We continue to pry information on his music and upcoming projects, but the questions he hits us with are more reflective. At one point he asks us to name a famous woman painter: “Umm…” and some silence. Later on Frida Kahlo’s eyebrows would haunt me, but at that moment I had no answer. “Exactly” was his response at our non-response. Not fully established himself, Vee Miyagi is attempting to change that by promoting Chicago women’s art through through an all-woman art show. This show is just a part of what Miyagi envisions for his art-based charity group, No Color. It’s a fitting name; the ultimate mission for No Color aims to break through racial, gender, or any other discriminating factors that prevent someone from doing what they ultimately love. “It’s all about balance and opportunity” he says, utilizing art to push past the boundaries of perception.

Vee Miyagi shows us the original artwork for his song, “Win Win Win.” This original painting was created by Chicago artist Just Fanni.

Currently, Vee Miyagi is releasing a new track every Sunday in collaboration with Chicago artist Just Fanni, who contributes an original painting for each song in the 12-week long series. The songs strum along with Miyagi’s booming, preaching voice and the art exists in an email jpeg to be appreciated along the melodies and raps. It’s a unique, important marketing idea, but far from his most ambitious.

The Infinite EP is exactly what it sounds like-an ever-growing album with tracks added “to death”. It requires monk-like patience and persistence to keep at it. He’s been working with his friend Kid Grey on the project, who’s handling most of the production, and is working on his own production skills as well. It’s all a work in progress, but Miyagi isn’t rushing it. “New guys don’t care about the future” he reflects. There’s a clear difference between the trends and the legends in the rap game, and Miyagi is nothing if not a student of the game.

His influences extend beyond “Kick, Push”; he started rapping at age 11, inspired by the likes of Kanye West and 50 Cent. He carries their booming tone, but with a calmer, steadier flow. His raps can sound like a rhythmical lecture at times, with life advice strung along inside, Counting without the commas, but never without the karma/You get out what you put in, he raps in the twinking “Ki”. The money may not buy your way to Nirvana, but it can’t hurt.

But slower songs don’t burn along, they’re set aflame with Miyagi’s voice. Choruses are shouted along with the same intensity used for his hardest bars. Creepin’ pianos and songs that limp through are his haven where his rhymes grow best into your thought stream. Self reflection and self-growth are common themes for him to speak on; imagine MF Doom reminding you to do your best for the day.

We head over to the nearby 7/11 and call over an Uber. We reflect on the suburbs and the city and where we’re happier. “You can’t measure life” he told us later. When I asked for clarification, he explained “You could be 25 and lived the life of an 100 year old”. It’s a simple, yet gentle reminder that age is indeed just a number and life flows on despite how many candles are on your cake. The Uber pulls up, we say goodbye, and Vee Miyagi is back into the studio to go lap a few more 100 year olds.